When Women Get In Power 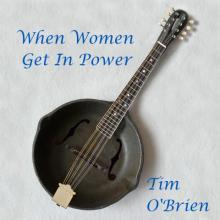 When Women Get In Power (composer and lyricist unknown)

Some fine morning we’ll all awake, find a stand that the women’ll take
Change this world all upside down, we’ll have a lady mayor in every town
They’ll spend all the money that the poor men make, to run the country they’ll undertake
They say the men do not advance, it’s time for women to wear the pants

Some men will sit at home and fix, while the women talk politics
They’ll go inside the legislation walls, they say they’re goin' to make the laws
The old maids will be in power then, they say they’ll marry all the single men
And the man that refuses to take a wife will have to go to the pen for life

Well, The men will have to take back seats while the women police the streets
Then you’ll dare not smoke or chew, for you’ll catch it if you do
They’ll be runnin the courts you see, judge and jury they will be
What she says will have to go when we poor men can't stand no show

Now here’s to you poor married men, by nine o’clock you'd better be in
She’ll search your pockets and if you ain’t right, she’ll lick you if you come home tight
She’ll tell you that she’s boss now, there’ll be no use to rage around
You have to obey your mother in law and silent be unto her jaw

Now ever since the world began, the women have tried to rule the men
She made man commit the first offence and she’s been after man ever since
Now God made the word and he rested then, then he made a man and he rested again
Then he made a woman from man’s expense and neither God nor man have rested since

Like most everyone else on November 9th , I was surprised at who won the presidential election. Regardless of the result of that historic contest, or how you or anyone feels about it, this song’s lyric is still timely. While the lyric’s author is unknown, the subject matter refers to the idea of woman’s suffrage, which was brand new in the 1920’s. Of course nowadays, women not only can vote, they can become president. As Leadbelly said once, “They even have women that can drive airplanes!”

Blind George Reneau recorded a very similar piece in 1925, but my version comes from an August 1933 recording by West Virginia’s Bill Cox, the Dixie Songbird. Employed as maintenance man at the Ruffner hotel in Charleston, he would sometimes entertain patrons with his guitar and harmonica. IN 1927 the hotel started radio station WOBU, and Cox started performing in that new medium. His erratic attendance drew a suggestion from the station manager that Cox make some recordings so that they could play them when he was absent! In the end Cox recorded about 150 songs for various labels under various names. He wrote some fine original songs as well, including the well-known country standard Sparkling Brown Eyes. Doc Watson said he got the idea to play harmonica on a neck rack while simultaneously playing guitar from Bill Cox. Born August 4, 1897 in Eagle WV, he died in obscurity in Charleston on December 10, 1968.