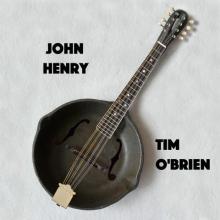 You know that thing when you fill out a form online - where you type in some letters to prove you're not a robot? John Henry, the steel driving man, was not a robot.

Back in the post civil war days when John Henry did his thing, they had new technology like the telegraph and steam power. Steam powered ships had a pre-existing medium - the high seas and some rivers - on which to travel, but the steam train needed roads graded and rails laid to do their thing. Where there were mountains, they needed tunnels. There were a lot of ex slaves who were now convicts in that period, a new labor source for the railroad speculators. That's where John Henry comes in.

In Wendell Berry’s essay "The Work of Local Culture" (1988) – from his book "What Are People For?", the Kentucky poet and philosopher describes and laments the change our society has experienced in the past 150 or so years. The loss of community, the rape of the land, the movement of focus from small, self sufficient villages to large, central, urban centers that can rule and destroy the old system. Commerce and central authority dictating how we live, and even how we think. His words ring true, and that loss helps explain the nostalgia in a lot of country music and in our daily lives. As tech takes on more and more of our space, we reach for the homemade bread, and plan a vacation in the country. That longing for the "real" manifests everywhere you look, and partly explains the recent Presidential election. Enough people want it so bad, they put faith in a guy who lives in a gold and marble tower. A bit like Rome?

But don't forget that technology CAN unite us. The song "John Henry" not only illustrates that technology can't beat a human, not every time anyway. It also shows how those advances allow us to reflect on our circumstances.

People didn't communicate outside their locale so much before the radio and telephone. Coal mostly sat in the ground until steam engines popped up. Between the advent of steam power and the proliferation of radios and telephones, the railroad was a kind of information highway. The legend of John Henry started literally underground, as tunnel diggers, road graders, and coal miners were the ones who spread the legend. They said, "John Henry's one of us". And as they worked they made up rhymes to sing, keeping the rhythm of the pick, shovel, and hammer going. They were a certain strata of the working folks, low on the riches scale, but because they knew each other in wider and wider circles through the new mobility the railroads provided, their rhymes spread far and wide over a few decades. John Henry was from their world, a world that was changing fast, and his story was their symbol, not only of pride in their work, but also of the danger of trying to compete with new machines like the steam drill. It's THE classic American folk song, and it's metaphoric manifestations keep growing and instructing as the years roll on. This was grassroots, communal art from the newly free moving African American culture, promoted greatly across the color line by poor whites who often worked along them side by side.

We need to keep singing this song and use it as a template for new songs. Advances in technology keep coming, and we still wonder when the robots will take over, so there's plenty to write about.

Recommended reading besides the above mentioned Wendell Berry piece– "John Henry the Steel Drivin’ Man" by Scott Reynolds Nelson for history, and "John Henry Days" by Colson Whitehead, fiction with John Henry as an overall metaphor.

I played a gourd banjo made by Bob Thornburg on this track. The banjo used to belong to Mike Seeger and I hope Mike would approve of my version of the song.

I have a new cd "Where the River Meets the Road" coming out in a few months. It focuses on music from my home state of West Virginia, and this track was on the big song list but didn't fit on the final cd. Most scholars agree that John Henry's race with the steam drill took place during the digging of the Big Bend tunnel near Hinton WV. More on the new cd soon.