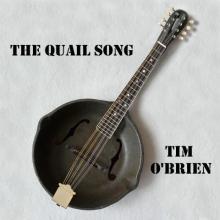 Soon after moving to Nashville in 1996, I met John Carter Cash, son of Johnny Cash and June Carter, at a pickin’ party, and we’ve crossed paths and stayed in touch over the years. He produces recordings in his dad’s cabin studio and has hired me a time or two as a sideman. One day he sent me the lyric to this song and asked if I’d consider writing music for it.

The poem is from John Carter’s book Lupus Rex. A children’s novel inspired by The Book Of The Dunn Cow, and written in the tradition of Watership Down, it’s an exciting and meaningful tale told from the point of view of two quails named Ysil and Cormo. The quails call the passageway to the afterlife “the darkened door”.

My music went in a Celtic direction and John Carter approved, so we recorded it as a promo track for the book, which was published in the summer of 2013. Some fine pickers came by to play that day. Bassist Byron House has played with folks like Sam Bush and Robert Plant over the years. Matt Combs is staff fiddler for the Grand Old Opry, and Mark Howard’s credits as musician include stints with John Hartford and the Clusterpluckers. Mark’s also an in demand recording engineer and producer. For years he owned a studio that was very near my home.