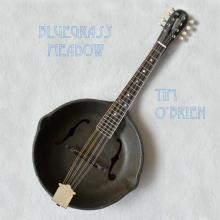 Song notes:
Music saved my life. I’ve read that sentence many times over the years and believe it to be true in very many cases. Ed Haley was blind and then orphaned by the age of six, which makes his seemingly happy circumstances remarkable. In spite of these setbacks, Ed became a master musician, developing his own distinctive sound and style, and influencing countless other players during his lifetime and beyond. Born August 16, 1885 in Logan County WV, he was raised by his family and friends, eventually marrying another blind musician Martha Ella Trumbo, and raising six children of his own. Ed and Martha Ella got around by train and riverboat, and played for audiences in West Virginia, Kentucky and Ohio. Never recording commercially, Ed nevertheless made home recordings later in life, many of which have been reissued by Rounder Records. Haley died in 1951 in Ashland KY.

I first heard the name Ed Haley back in about 1976, just after Rounder issued an LP of some of his recordings. My friend Greg Dearth was then playing fiddle with the Hutchison Brothers and learning Ed’s tunes. Later John Hartford took an interest in Haley’s music and his lore, and helped Rounder release two more sets of his recordings in the late 1990’s. Some of the recordings are better sound quality than others, but fiddle geeks like Dearth, Hartford, and I are more than happy to pick out the fine music behind the surface noise. The Center for Popular Music in Murfreesboro TN is currently working on yet another compilation of Haley’s music.

Yes, I’m a hopeless fiddle geek. John Hartford was right when he said that banjo will get you through times of no money a lot better than money gets you through times of no banjo. And you can easily substitute “fiddle” for “banjo”. For many years I would take a weekend off from touring to attend a fiddle convention at Mount Airy, NC or Clifftop, WV to play and learn more tunes. The music was originally made for dancing, but it’s become much more than that for the hard-core fans who collect tunes sorta like stamp collectors assemble their collections. While the tunes make for good listening, a lot of us get our main reward from playing them. Old time musicians think of each tune as a particular meditation, or mantra, and the social aspect of playing old time string band music allows for several mantras to be repeated over and over for several minutes each at jam sessions all around this planet. When the drool starts dripping out of both sides of our mouths, you know we’re in that zone! I still reach for the fiddle in quiet hours around home, and Jan and I keep learning new old time tunes, playing them mostly for own enjoyment. It’s hard to recreate Ed Haley’s swing on this piece, but I enjoyed trying on this track featuring Noam Pikelny on banjo, Mike Bub on bass, and my favorite living fiddler Stuart Duncan on guitar. I hope our version nudges you to listen to Ed himself.