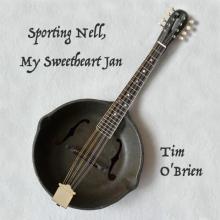 Jan and I play mandolin duets for fun, and often when learning a new piece, I’ll write it down in a little moleskine notebook she keeps in her mandolin case. These two reels are about a third of the way through the book, which means we’ve been playing them for a few years now.

We learned them from the playing of Jacqueline McCarthy and Tommy Keane, from County Galway, Ireland. Their 2010 CD The Wind Among The Reeds is a lovely set of traditional music played on Concertina (Jacqueline) and Uillean Pipes (Tommy), on which they are joined by bouzouki ace Alec Finn. Tommy and Jacqueline have an extended musical family and you might stop to hear them play sometime at Moran’s Oyster Cottage in Kilcolgan. Moran’s has it’s own oyster bed and a well maintained Guinness tap, and it’s conveniently located just off the highway between Galway and Shannon airport.

I usually play a Nugget mandolin, but on this track I play a Vega mandola that used to belong to Mike Seeger. Jan plays a Collings mandolin and has a dog named Nugget. Mandolin maker Mike Kemnitzer, aka “Nugget”, says Jan should change her dog’s name to Collings.