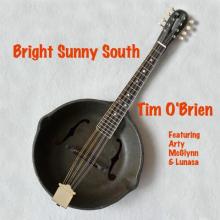 I leave my confinement and comfort of life
For the dangers of bloodshed, provision and strife
I come to conclude and reply with my word
As I shoulder my musket and billet my sword

This Civil War era song is often associated with Southwest Virginia banjo blues balladeer Dock Boggs, who first recorded for Brunswick Records in the late 1920’s. Rediscovered by Mike Seeger in 1963, Boggs soon recorded this piece for a Folkways LP that was released in 1964. Bright Sunny South tells the story of a young man leaving his home at wartime.

After a few nights performing at the Celtic Connections festival in Glasgow, Arty McGlynn and I spent a day in John McCusker’s studio in the Scottish Borders. This is one of the songs we recorded, and I soon sent it to my friends Cillian Vallely, Trevor Hutchinson, and Kevin Crawford from the Irish band Lunasa. They added their sounds to the track from studios in Dublin and New York. When I got home from my UK tour I got in the studio to thread it back together, added fiddle, and then mixed it. Not an especially short order, but it’s quick enough to come out while I’m actually on tour with Lunasa! Check our websites for concert listings through March 20. - Tim