Brother Can You Spare A Dime? 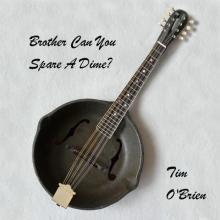 Once in khaki suits, gee we looked swell
Full of that Yankee-doodly-dum
Half a million boots went slogging through hell
And I was the kid with the drum

If Yip Harburg had only written this one lyric, his place of honor in songwriting history would still be significant. The weighty sentiment and detail within these few lines really nail the story of a shattered American dream. It’s one of my very favorite songs.

Harburg, the son of Russian Jewish immigrants, grew up in New York City, and started a life long friendship with George Gershwin when they worked together on their high school newspaper. As a Socialist, he moved to Uruguay during World War I to avoid military service. After the war he started writing light verse for New York City newspapers, later co-owning a successful electrical supply company, which went bust after the 1929 stock market crash. He soon began collaborating, at the urging of Ira Gershwin, as lyricist with composer Jay Gorney. Together they wrote songs and whole musical plays, including the 1932 Broadway show Americana, which included the song Brother Can You Spare A Dime. Later recorded by Bing Crosby, Rudy Vallee, and Al Jolson, the song became the indelible theme song of the Great Depression. Harburg’s illustrious career included work with composers Harold Arlen and Jerome Kern for Broadway shows and Hollywood movies like Cabin In The Sky and Finian’s Rainbow. He won an Academy award in 1940 for his song Somewhere Over The Rainbow from the movie The Wizard of Oz, and wrote the lyrics of all the songs as well as much of the dialogue. Yarburg was later blacklisted by the House Un-American Activities Committee from 1950 to 1962.

My recording came about when CMH records asked me to record some Depression era songs for a compilation titled Oh Brother Can You Spare A Dime, which aimed to capitalize on the massive success of the Coen Brothers movie O Brother, Where Art Thou? and its hit soundtrack. Another song from the same session, Blind Alfred Reed’s There’ll Be No Distinction There, is coming in a few weeks on SOS.