8. My Old Brown Coat and Me

Oh, the moon is out, the stars are bright, the larks are singin' free
Come listen while I sing about my old brown coat and me
I lived upon my father's farm til I was twenty-one
I took a farm then of my own and a man's life begun

I fell in love with Mary Brade, her father owned a store
There never was a girl beloved so tenderly before
But Mary Brade was very proud and haughty as could be
She 'oft times said that she'd never wed my old brown coat and me

I did not stop to plead the case for pleading was in vain;
I bade adieu to Mary Brade, never saw her face again
There's forty summers over my head, there's riches in my store;
My children play out on the green, my wife stands in the door
I've land enough, I've money enough, I've houses tall and high
There's not a squire in all the land can wear such clothes as I

Now, Mary Brade was very proud, she was haughty as could be
She was wedded to a lawyer's son who's name was Joe Talle
He wore a coat all shiny black, he looked so very grand
And Mary fancied he would make a noble and true man
Now, Mary's husband, he became a pirate on the sea
She 'oft times said, she'd wished she'd wed my old brown coat and me

Now, girls, when you are caused to choose the like that bends the knee
Then count the fate of Mary Brade, my old brown coat and me
Remember that an old brown coat, though not so very grand
Can cover up as warm a heart as any in the land 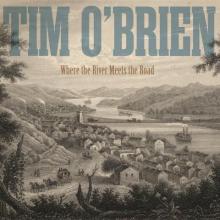 Where The River Meets the Road